How Much Do Snow Blowers Weigh?

Many people consider weight as one of the most important factors in choosing a snow blower. For some, they avoid heavy equipment since they can be difficult to maneuver and control. They look for lightweight models that they can easily take out and use for light snow removal. Others, however, prefer a heavier snow blower because it can keep to the ground and remove snow more efficiently.

So how much do snow blowers weigh and what is the ideal weight for you?

Generally, the heavier and larger a snow blower gets, the more powerful they are. So if you are planning to buy a snow blower, the first thing you have to consider is the amount of snowfall you usually experience in your area. If you only get light snow every year but don’t want to use a shovel, a light snow blower will suffice.

However, if you get intense snow storms during winter, you might need a bigger, more powerful, and heavier machine.

To help you choose the right weight for you, here’s our guide on how much snow blowers weigh.

Other Information You May Find Useful:

Snow blowers usually have different weights, depending on their type. Single-stage snow blowers are the smallest and lightest weighing between 24 lbs to 95 lbs (11 kg to 43 kg). These models are ideal for paved driveways and sidewalks. They are compact and lightweight, making them easier to control. However, they are not suitable for heavy snow and large pile-ups.

For a more powerful machine, you can choose two-stage snow blowers. They are much heavier, weighing as much as 302 lbs (137 kg). Additionally, they have a stronger build and have more complex designs. Thus, making them more capable of handling heavy and deep snow. Furthermore, they are equipped with larger wheels, larger mouths, and some have rotating chutes. So expect them to have more weight than single-stage models.

Now, there’s another type of snow blower – the three-stage units. They are designed for heavy-duty jobs that are impossible for snow shovels and single-stage models to complete.

They are so powerful, making them the best option when you live in the snow belt. However, in terms of size and weight, three-stage models are in the same class with two-stage types.  But the cost of this snow blower is usually higher than any other type of snow blower.

Other Factors Affecting How Much Do Snow Blowers Weigh

Aside from the type, other factors are affecting the weight of snow blowers, including the following:

The clearing width will give you an idea of how large and how heavy a snow blower is. Generally, the bigger the width, the heavier the machine is.

One of the biggest factors that affect the weight of snow blowers is how they are powered. You can choose between electric and gas-powered machines. In electric, you can choose cordless or corded models.

Electric snow blowers are quieter and require little maintenance compared to gas-powered. But more than that, they are more compact and lightweight. Thus, making them easy to store and transport.

But comparing the two, cordless electric-powered snow blowers are heavier than corded due to the added weight of the batteries. They become even heavier as the battery pack gets larger.

Now, the heaviest machines are powered by gas. As you move up in size and weight, gas snow blowers become more efficient with better working capabilities. They also become more powerful and able to clear heavy snow.

To see the difference of clearing width and power source in the weight, let’s compare some of the most popular snow blowers today.

The weight of snow blowers is directly related to its type, clearing width, and power source. The lightest types are electric single-stage snow blowers that require a power socket to work.

The heaviest are gas-powered three-stage models is the Cub Cadet 3X Snow Blower. 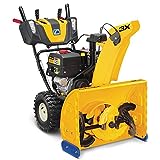 Also, machines with wider clearing widths are heavier. For example, the Cub Cadet 3X, which has the widest clearing width in our list, weighs the most at 265 lbs (120 kg).

However, there are exemptions to this such as the EGO Power+ SNT2102. With a clearing width of 21 inches, it’s still lighter than the PowerSmart DB5017, which has an 18 inches width.

Overall, bigger and heavier machines are harder to move around than smaller models. They also take up a lot of space when it comes to storage, which can be a problem for some.

However, they are more capable of going against large icy banks. Thus, when choosing what show blower to buy, always consider your needs.